On March 21, Novosibirsk City Chamber of Commerce and Industry held negotiations between Novosibirsk and Japanese entrepreneurs. 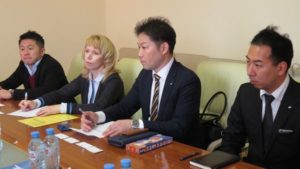 The head of Japanese delegation Taika Isioka told that the Japanese side is interested in activating business and cultural ties between Novosibirsk and Sapporo. The main purpose of the visit is to explore the interest of Russian companies, to identify areas for long-term cooperation and to outline the program for visiting Novosibirsk by a large delegation from Japan in September.

Welcoming the guests Yuri Bernadsky noted that Japan is an important cultural and business partner. Novosibirsk and Sapporo are united not only by the fact of being sister cities, but also by membership of the World Technopolis Association. In 2018 Novosibirsk turns 125 years old and this is a good reason for the further development of mutually beneficial relations.

Novosibirsk City CCI annually organizes B2B meetings of Russian and foreign entrepreneurs, and the mutual interests of Novosibirsk and Japanese businessmen can lie within such areas as metal processing, engineering, energy-saving and energy-efficient technologies in all industries, technologies for recycling household and industrial waste, developing of biomedical technologies.

Vyacheslav Zykov pointed out that the sphere of waste processing is notable by the whole waste management system as an integral mechanism: from state regulation to garbage collection from the population. In Russia today the attitude to recycling is changing, new laws are being adopted, technologies are being improved. Therefore we are interested in technological solutions for recycling: what production, from which waste it’s produced and where the products of this production are subsequently used.

According to Vyacheslav Zykov, in the Novosibirsk region there are a large number of enterprises which are engaged in the construction of wooden houses, so we are also interested in experience exchange and long-term relations in this sphere.

Sergei Chesnokov spoke about the Presidential program for training personnel, which was created 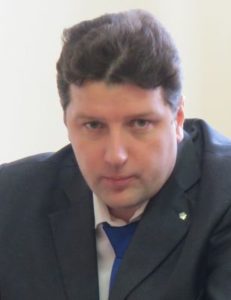 in order to raise the national economy by the forces of young initiative leaders. This program has been implemented for more than twenty years; each year 120-150 managers are graduating finishing this course. An important component of the program is foreign internships which allow not only to join the experience of foreign partners, but also to get business contacts. Japan is a participant of this program. In addition, the Ministry of Economic Development of the Russian Federation invites foreign entrepreneurs for internships in Russia. Due to this, over the past 10 years, Russian-Japanese business contacts have increased significantly. Therefore the spectrum of mutual interests is huge.

In particular, Sergei Chesnokov noted that as an entrepreneur he is interested in use of Japanese technologies in the production of translucent filler structures: «In this part of construction industry Russian and European materials are used, so we are interested in both materials and systems that are used in Japan, as well as in information on state control over construction».

During the visit the representatives of the Youth Council of CCI of Sapporo and the NCCCI agreed to hold a Russian-Japanese forum in Novosibirsk, to organize B2B negotiations between Novosibirsk and Japanese companies, and to visit the city’s enterprises. Representatives of Japanese business are interested in developing of long-term partnership relations, in strengthening trade and economic ties and in the effectiveness of entrepreneurial projects of the two states.