On February 14, a meeting of representatives of Novosibirsk business with the delegation from the Japanese city Sapporo took place at the Novosibirsk City Chamber of Commerce and Industry.

The Novosibirsk business circles on the negotiations were represented by the president of the NCCCI Yury Bernadsky, the vice-president Tatyana Bernadskaya, the general director of CJSC “First Construction Fund”, the chairman of the Regional Business Club of Constructors Mayis Mamedov, the general director of “International Center “Siberia” Co. Ltd. Arkadiy Kurmakaev, the president of the Union of transport and logistic companies Sergey Maksimov and others.

The Japanese side was represented by representatives of the International Economic Strategy Office of the Sapporo City Hall: the chief of the Economic and Tourism Affairs Bureau Takeo Ohashi, the chief of the International Relations Department Akiko Kikuta, managers Ryoji Motoyama and Masahiro Abe, the journalist of the newspaper Hokkaido Construction Journal Shiina Takeuchi.

Takeo Ohashi said that the visit of the Japanese delegation is timed to the exhibition WorldBuild Siberia / SibBuild, so the delegation consists of construction and architectural companies, developers of construction technologies for the regions with cold climate. Mr. Takeo Ohashi noted that, despite the long-standing sister links between our cities, there has been no full-scale economic relations till the moment. The Japanese partners intend to develop economic relations with Novosibirsk not only in the sphere of construction, but also in other industries.

Yury Bernadsky pointed out that the foreign trade turnover between Novosibirsk and Japanese companies has increased by 20% over the previous year. The economy of the Novosibirsk region is diversified, therefore mutual interests can coincide in energy-saving and energy-efficient technologies in all industries, technologies for recycling household and industrial wastes. Novosibirsk is one of the largest centers in Russia for the development of biomedical technologies, as well as the creation of a national element base. The Japanese companies have been working with a number of regional enterprises, in particular, with the research-and-production association “ Radio and Microelectronics” JSC.

Sergey Maksimov told about different variants of cargo delivery from Japan to Novosibirsk. Arkadiy Kurmakaev told about cooperation in the sphere of tourism, including business tourism. Mayis Mamedov noted that building companies of Novosibirsk are interested in high-quality Japanese products and equipment and in the experience of Japanese architects and designers.

Summing up the results of the meeting, the president of the NCCCI expressed the hope that the negotiations at the Chamber and at the exhibition WorldBuild Siberia / SibBuild will promote new mutually beneficial business relations between entrepreneurs of two countries. 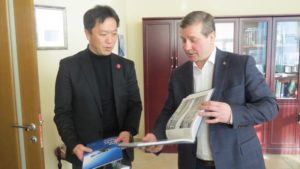 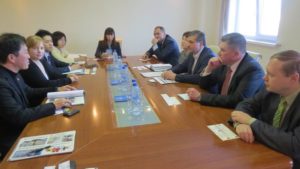 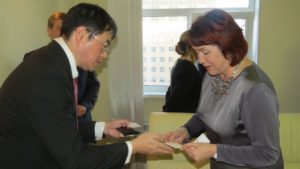