Legal aspects of export to the Kingdom of Spain

On December 7, within the framework of cooperation between the Investment Promotion Agency of the Novosibirsk Region and the Russian-Spanish business portal with the information support of the Novosibirsk City Chamber of Commerce and Industry a webinar was held.

The event was attended by the Deputy Trade Representative of the Russian Federation in the Kingdom of Spain Evgeniy Abaev, an expert on corporate and tax issues in Spain “Glavbukh Bizasesor” LLC Alexey Kuleshov, founders of the Russian-Spanish business portal Roman Demian and Marina Bakhtina, Deputy General Director of the Investment Promotion Agency of the Novosibirsk Region Vasiliy Plotnikov, Vice President of NCCCI Tatyana Bernadskaya, representatives of Novosibirsk companies interested in entering the Spanish market.

Evgeniy Abaev welcomed participants of the webinar and reminded that in 2020 there was an online meeting where representatives of the trade mission told the Novosibirsk entrepreneurs about the Russian-Spanish economic relations, about the rules of foreign economic activity with Spain and Portugal. According to the representative of the trade mission, online negotiations aroused great interest from the Novosibirsk business.

Marina Bakhtina told about Russian-Spanish business web portal, whose main task is to support representatives of Russian small and medium-sized businesses in promoting their products and services in Spain, as well as attracting investment and technology to Russia.

Alexey Kuleshov told about the specifics of work in the Spanish market from the point of view of the current law, as well as about the peculiarities of setting up and registering companies in Spain.

During the on-line meeting, the entrepreneurs of the Novosibirsk region got answers from the representatives of Russian trade mission in the Kingdom of Spain and the Spanish market experts on the urgent issues of economic activities as well as useful links and exchanged contacts for further cooperation. 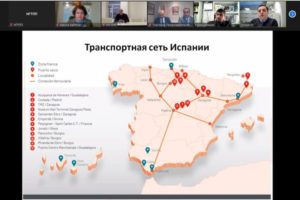